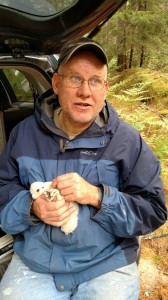 Mark Manske established Adirondack Raptor Inc. in 2008 and is the sole owner of the company.  He was a public school educator for 27 years, an Adjunct Professor at Paul Smiths College from 2007 to 2012 and from 2015 to the present, a wildlife rehabilitator from 1994 through 2002, a master falconer since 2003, a master raptor bander since 1988, and a licensed nuisance wildlife control agent from 2008 through 2012.  Mark has also published stories in his column in the EMBARK, a periodical that is published every other month by the Adirondack Daily Enterprise in Saranac Lake.   He has published several articles on birds of prey in scientific journals through the years. Mark trained under the tutelage of Drs. Frederick and Frances Hamerstrom (graduate students of Aldo Leopold and world renowned biologists) in the early 1980s at the University of Wisconsin at Stevens Point.

Our mission is to educate the public about the importance of birds of prey in the environment, and to manage and conduct research local raptor populations in order to protect the species