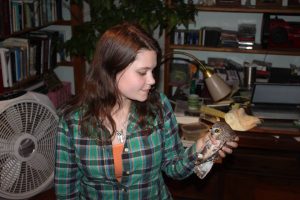 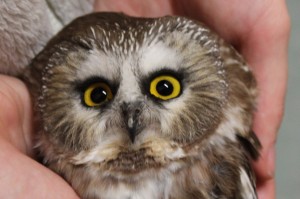 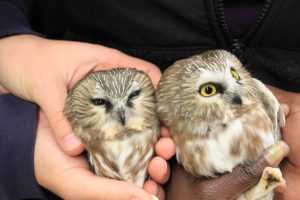 We established a northern saw whet owl banding station in Paul Smiths, NY on 21 October 2011 and moved the station to Dickinson Center in 2014. We are part of project owl net and look to learn more about our resident population. The goals of the Northern Adirondack Saw-Whet Owl Research program are to:

4) Study molt and other aspects of biology in NSWOs.

5) Use owls and owl banding to educate the public about conservation and wildlife issues.

The Saw Whet Owl Banding Station opens on 20 September and runs through 10 November.  Nets are open a half an hour after sunset and may stay open until sunrise on busy nights and only until 11:00 PM on slow nights.  We have captured owls from as far away as Duluth, MN. and have caught owls that are 6 years old.