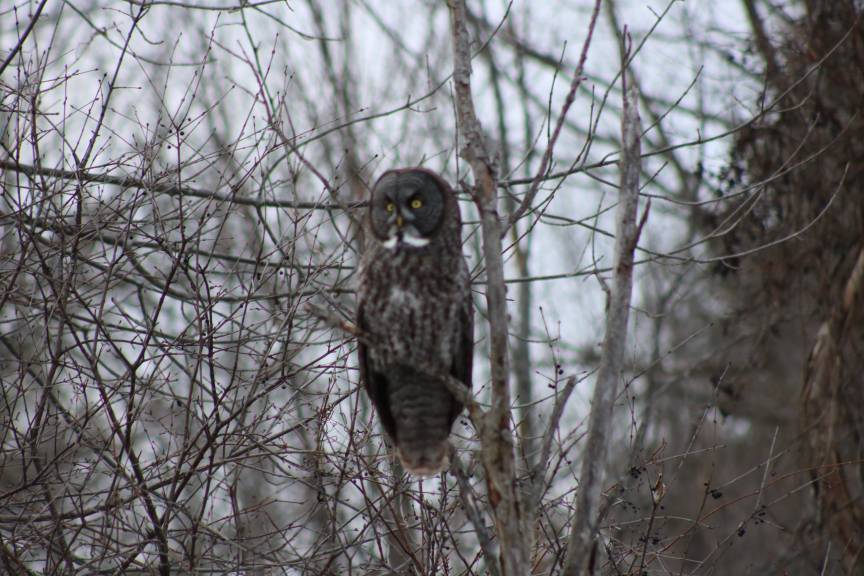 There is so many different topics I can focus on right now.  I could focus on our new administration gutting all the environmental safeguards that we have developed from the past 2 centuries in order to increase the GNP.  Or I could focus on the fact that the search for the almighty dollar has opened our world up to much more abuse.  I could focus on the tragic story of rhino that was killed in a zoo near Paris for its horn.

Instead, I am going to focus on an event that happened here in northern New York State this winter.  During the winter of 2017, we have had a massive eruption of Great Grey Owls coming down from the Taiga in search of an abundant supply of food.  Great grey owls visit us on rare occasions, generally in large numbers every twenty or so years when there is a food shortage up north.  When they do make the trip south of the border, they are generally met by an army of over enthusiastic birders that are intent on seeing the species.  Some of these birders will inevitably chase the bird around mercilessly in order to get it on their precious list or to photograph the hapless visitor.  This said, most birders are ethical and respectful of the well-being of the individual (that is just trying to eek out a meager living doing a winter season).  But with the onslaught of this ragtag army of rabid birders comes the few that are unethical or clueless as to the proper manners they should display.

Through the decades I have watch in horror as a few birders have announced to the world the bird’s exact location so that others can experience viewing a new and rare sight.  This is admirable that they are trying to allow others a chance to view something so rare, but unfortunately it generally turns out bad for their quarry.  People have thrown snowballs, drug rats on strings, used squeakers or walked directly at the bird in order to flush it for that important action shot.  These birds are not here to present a photo op to anybody but to enhance it’s survival.  In their exuberance for that “once in a lifetime experience” this tends to be forgotten.  The internet is far reaching and often the locations are posted with the thought that only certain folk will see the posting…but everybody can see the post.  After every posting, there is the inevitable whining that people are too blase and cavalier about the well-being of our guest.

I have never posted locations and have often suggested this idea to the throng at large.  This suggestion has been met with a wide variety of responses.  To their credit, the majority of birders are genuinely concerned for the individual birds health but there is a small group that takes advantage of this bird’s presence to take endless photographs that do the individual bird or species any good what so ever.  They are more interested in acquiring an imagine of the bird than they are about its overall health and well-being.

Years ago I banded a visiting northern hawk owl and received several messages complaining that I chased the bird away.  I have participated in Project Snowstorm where we have do the same thing with snowy owls.  The few complaint I have received basically complain that the bird will no longer sit still so that they can crawl directly underneath its perch.  These are the same people that have the cannons for telescopic lenses and came get the same shot if they just showed patience.

I have suggested that if people feel compelled to post locations then it is on them to protect our visitor that they just set up for a tougher visit.